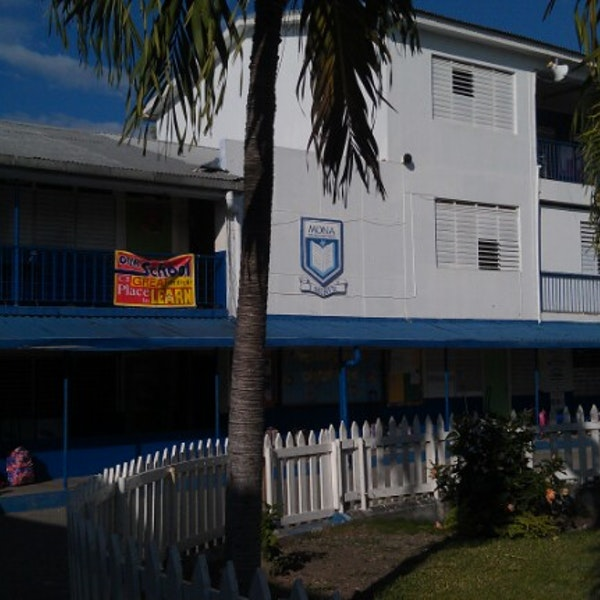 Mona Preparatory School, formed under the auspices of the United Church in Jamaica and the Cayman Islands, opened its doors September 22, 1964. The school is a private institution which is governed by a Board of Directors appointed by the Synod of the United Church.

The mission is to provide a Christian environment in which students can learn and develop into well- rounded individuals who see service as an important part of their contribution to society.

Mona Preparatory School has been celebrated as a beacon of excellence in preparatory education in Jamaica for forty-six years. Officially opened on September 29, 1964, the school is governed by a Board of Directors appointed by the Synod of the United Church.

Founded on sound Christian principles and inspired by its Motto, “I Serve” (which has its origins in the name and guiding ethos of the first headmistress), Mrs. Daphne Kathleen Service Vidal Smith. The school was initially envisaged to service the developing communities of Mona Heights and Hope Pastures as well as the University College of the West Indies, as the University was then known.

Mrs. Vidal-Smith who served the school in that capacity for 16 years, was inspired by her dream of giving the child a “total education” in “a school where a child could get everything”. An exceptional educator and an accomplished musicologist who, among other awards, earned a British Council Bursary to study music and schools broadcasting in the U.K. Mrs. Vidal-Smith brought her intense passion for music to enhance the cultural and intellectual life of Mona Prep. This influence is still present today.

A Tradition of Innovation and Excellence 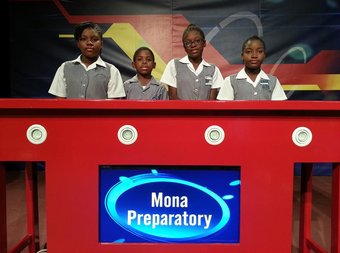 Throughout its history, students of Mona Preparatory School have indeed received a well-rounded education, being exposed to knowledge and experiences that develop the mind, body and spirit. In addition to its reputation for quality academics and the production of many Government Scholars, the school has pioneered innovative developments in its curriculum, such as the study of foreign languages at the primary school level and the early introduction of computers. Several specialists’ subjects are offered, including Computer, Physical Education, Gymnastics, Art, Speech, Dance/Movement and Music.

The mountain of medals gained in the JCDC Competition over the years is testimony, not only to the tradition of excellence, but also to the rich and vibrant artistic and cultural life of the school, fostered by several exceptional teachers. For some years, the annual concert, boasting a full orchestra (of violins, cellos, chime bars, melodicas and percussion instruments) was a much anticipated social event. Mr. Noel Dexter partnered with us in producing a highly acclaimed boys’ choir.

In the sporting arena, Mona Prep has also excelled. Twenty-six times winners of the Alberga and Henriques football trophies, and strong performers in the JISA Inter-preparatory schools athletic meet, the school continues to distinguish itself as the current champions in the Scotia Bank Cricket Competition. In addition, Mona Prep. students have continued to perform well in Science and Maths competitions, having been the L.I.C.A. (now Vivian Rochester) Mathematics Competition champions, at one time for nine consecutive years. In addition, Mona Preparatory School still holds the record of 15 government scholarships in one sitting of the Common Entrance Examinations of 1984.

At Mona Prep. all children are encouraged to participate in extra-curricula activities, such as swimming, Brownies, track, netball, dancing, drumming, drama, orchestra and choir.

The teaching staff of Mona Prep, trained professional who maintain and enhance their professional standards through continuous professionals development, are encouraged to be open, honest and supportive of the students’ efforts.

An ethos of service has, indeed, permeated its history as the school has benefited from the commitment and distinguished service of many individuals over the years, such as past Board Chairmen, Dr. Henry Shaw and Mr Ishmael Robertson who served steadfastly for over 30 years. The current chairman is Mr Joseph Taffe.

The school has been strongly supported by its partnership with its parents and a committed Parents Teachers’ Association.

What epitomizes the Mona Prep. graduate?

So at the end of this rich journey, what qualities epitomize the Mona Prep. graduate?

In addition to the development of intellectual and physical skills, students of Mona Prep. are taught to value the personal qualities of confidence, honesty, reliability, tolerance and enthusiasm for knowledge. They are also encouraged to be of service to each other and their community.

Such qualities, coupled with the requisite knowledge and skills, have enabled Mona Preparatory School graduates to make a significant mark on society in Jamaica as well as beyond our shores. On this 46th anniversary, the school can celebrate a glorious past as it embraces, with confidence, the opportunities of the future.